Sajal Ali, Bilal Abbas Starrer Kuch Ankahi to Release January 14, 2023
Kuch Ankahi is all set to be aired on January 14th, 2023 on ARY Digital.
Hear hear O Rangreza fans! Here is a great piece of news for you. After the great success of Bilal Abbas Khan and Sajal Aly starrer O Rangreza, the fans are soon going to see them in the new drama serial Kuch Unkahi.  Both the leading stars are once again coming in ARY digital drama serial Kuch Unkahi. Kuch Unkahi is presented by the same producers and craters who have presented blockbuster drama serials like Rehai, Dil Na Ummed To Nahi, Akhri Station, and Udaari. Looking at all these dramas, pretty sure Kuch Unkahi is going to break the shackles and taboos and speak on an important social issue.
News has it that Kuch Ankahi, the latest narrative from the Kashf foundation will be a tribute to Haseena Moin and her impeccable storytelling as a writer. She played a huge part in portraying women as strong, independent, and have minds of their own in all of her plays. The story of Kuch Unkahi will itself be a nice amalgamation of intelligent comedy and romance coupled with strong female characters. According to Mohammad Ahmed,
“Kashf related some points to me that they wanted to address. This time they wanted to convey their message to audiences in a light-hearted tone. So, I created a story and developed characters around these points. It took me about a year to pen down the narrative,” reveals the writer. 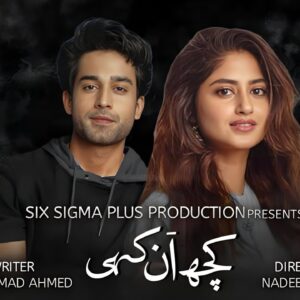 Kuch Ankahi is written by writer Muhammad Ahmed who is also playing a special role in the drama. The drama is being directed by Nadeem Baig and the rest of the ensemble cast includes Asma Abbas, Babar Ali, Qudsia Ali, Ali Safina, Vaneeza Ali, Irsa Ghazal, and Annie Zaidi. The OST for the song is composed by Azan Sami Khan and there is also one more song for the drama serial.  The drama series is going to be around 24 to 25 episodes.

Wabaal Episode 16: Hareem Sohail’s Zarka Is the Star Of This Otherwise Sluggish Story