Royal weddings are enjoyed by everyone the world over. Historically, they are aired on television and become a much talked about affair. Each detail of a royal wedding is scrutinised and observed, from the family’s ensembles, to the decor and flowers, to the process from the palace to the cathedral and of course, the bride’s dress and look. Historically, royal brides were clad in voluminous gowns with all the frills and trimmings. They were more modest, less skin bearing and were a lot more textured than the dresses brides are opting for now.

While tradition remains intact, and all royal weddings still combine all the elements, there has been a shift in the attire that royal brides are now opting for. Royal brides or brides joining the royal family are choosing sleeker dresses designed by modern designers who have the ability to create masterpieces that combine a modern day feel with a classic vibe. Modern day brides are adopting modern styles, yet remaining true to tradition at the same time. And so we look at three different brides who married in the modern age. 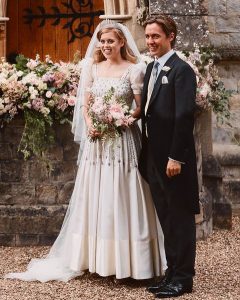 The most recent royal wedding took place during the Coronavirus pandemic, of Princess Beatrice and Edoardo Mapelli Mozzi. The couple was initially all set to tie the knot in May, but wedding plans came to a standstill owing to the spread of the virus. The couple then decided to wed in a private and intimate ceremony, in which only close members of the family were present. Soon after the ceremony, which took place at The Royal Chapel of All Saints in Windsor, pictures of the couple were released by the palace and Princess Beatrice was a sight to behold.

The 31-year-old royal was pictured with her husband standing in a stunning archway of flowers, clad in the prettiest embellished dress. In a second picture, the couple was pictured with her grandparents. It is important to note that the vintage dress worn by Princess Beatrice was borrowed from her grandmother, HRH Queen Elizabeth, which she teamed with a diamond fringe tiara which Queen Elizabeth wore on her own wedding day in 1947. The dress looks oh so fitting for a modern day princess. The satin dress almost covers her feet and features an embellished corset and bead work which goes all the way down lower than her waist.

The dress features short puffy sleeves which really make the dress look as though it is something out of a fairytale. The princess opted to have her hair tied half up and the other left loose. She opted for an all natural makeup look and social media is still abuzz with pictures of the happily married couple. 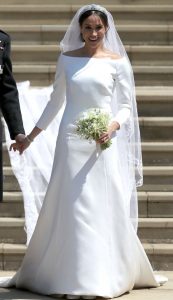 There was much chatter surrounding the wedding of Prince Harry and Meghan Marke back in 2018. If reports are anything to go by then the couple initially had difficulty to get approval for their wedding. All was well and good and they tied the knot at St George’s Chapel in Windsor Castle and the world watched this wedding on their screens. What would Meghan Markle wear, which designer would she opt for and would she borrow a tiara from the Queen?

Meghan Markle opted for British designer Clare Waight Keller, who is the artistic director of the fashion house Givenchy. The silk dress was a modern creation which featured a wide boat neck and full sleeves. The one thing that made her dress stand out was that it was free of any embellishments and accents. The dress hugged her figure, albeit loosely, at the waist, and flared out at the bottom. The dress also featured a trail and had a timeless yet elegant aesthetic. The dress had a relaxed demeanour and was rounded off with a pretty net veil which was adorned with floral details representing 53 countries of the Commonwealth. With her hair tied back in a bun and minimal makeup, Meghan Markle’s look is still talked about till this day. 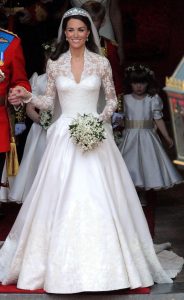 And we saved the best till last. Kate Middleton looked a class apart on her wedding day back in 2011. Her wedding dress has become iconic in royal wedding history and there’s no surprises why. Kate Middleton opted for British designer Alexander McQueen for her big day to combine tradition with modernity. Inspired by the Victorian era, the dress featured a narrow corset waist and a nine-foot-long waist. What stood out most from Kate Middleton’s dress is the lace detailing on the bodice and neck area which worked into the sleeves.

The lace work of the dress was all made by hand using a technique which originated in the 1820’s. The dress was rounded off with a silk tulle veil, atop which sat a Cartier tiara which was given to the Queen by her mother for her 18th birthday. Kate Middleton’s look truly honoured royal while combining a modern day feel. The wedding dress has joined the ranks of a number of iconic wedding dresses from history and was also put on display at Buckingham Palace in 2011.