Actor Mahira Khan, Urwa Hocane Among Others Pay Tribute To Qavi Khan for His Presidential Award Nishan-E-Imtiaz
It will be the veteran actor’s third presidential award.
Qavi Khan is one of our legendary actors who have worked in the entertainment industry for as long as one can remember. His contribution to performing arts is unparalleled. We have seen innumerable fatherly characters that have made a special place in our hearts. Recently he has received Nishan-e-Imtiaz by President Arif Alvi for his contribution to the field of performing arts. And it is not his first, the rather third presidential award for which many stars and celebrities have paid their tributes and heartwarming notes to Qavi Khan.
A little Introduction To Legend Qavi Khan 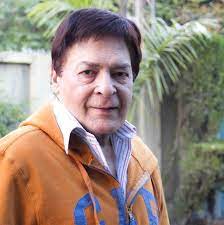 The veteran actor has recently turned 80 years. His acting career spans over 40 years, and he has played numerous roles that are worth remembering.  Be it radio, theatre, or television, he has made his prominent place in the entertainment industry. On the occasion of the 75th diamond jubilee anniversary of the country, actor Qavi Khan was conferred with Nishan-e-Imtiaz.
Actor Mahira Khan Calls Qavi Khan “You Are My Hero” Nation’s sweetheart actor Mahira Khan who has recently worked alongside Qavi Khan in the movie Quaid-e-Azam Zindabad paid homage to the actor. She shares a heart-touching tribute by saying “Qavi Saab.. the legend, the actor par excellence. at the age of 79 stands tall amongst a plethora of young artists, because to date, he is the most dedicated of them all. He is always prepared. He loves what he does and you can see it in every frame. She also shares on her social media handle that
He is generous with his words to actors like me and others, who watch him in awe.
I’ve learned so much about this man. He’s had his fair share of failures in life. and still continues to do what he does with a smile that oozes both humility and pride.
What an honour to have him amongst us. Alhumdulillah.
Mohd Qavi Khan Sahab- you are my hero
In the end, the Verna actor also shared a video clip from her recent movie Quaid-e-Azam Zindabad where Qavi Khan makes the whole movie scene impeccable with just a hand gesture.  Under the comment section, many celebs including Sanam Saeed, Model Fia Khan, and director Nabeel Qureshi paid their tributes as well.
Urwa Hocane Pays Tribute To Qavi Khan by Calling Him An Inspiration: 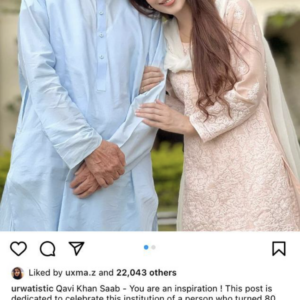 Actor Urwa Hocane is going to share screen space with actor Qavi Khan in the upcoming drama serial Meri Shahzadi Diana. On the sets of the drama serials, they got the news that Qavi Khan is going to be conferred with Nishan-e-Imtiaz according to the Udaari actor. She pays tribute to the Ishq jalebi actor by sharing “Qavi Khan Saab – You are an inspiration! This post is dedicated to celebrating this institution of a person who turned 80 this year and has the most energy and patience on set!
Yesterday on our drama sets he received the announcement that he has been awarded Nisha-i-Imtiaz, his third award from the govt of Pakistan after being honoured with Pride of Performance in 1980 and Sitara-e-Imtiaz in 2012. He received his accolades for working in Pakistani film, Television, Radio Pakistan, and Theatre. He has acted in over 200 films as his contribution to the fields of art. 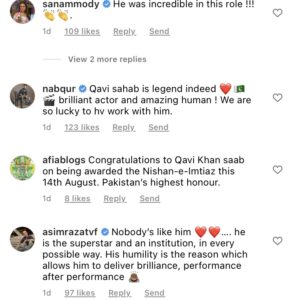 Badshah Begum Episode 22: Yasir Hussain Is a Treat To Watch As Kaiser