At long last! Gigi Hadid reveals baby bump and fans are losing it

Earlier this year, news of Gigi Hadid and her boyfriend, Zayn Malik being pregnant with their first child spread like wildfire on social media. It was only in April that the super model confirmed the pregnancy after which it was announced that the couple was going to be welcoming a baby girl later this Fall. And now, Gigi Hadid took to Instagram Live to engage with her followers and fans to clear some misconceptions which have been rife about her pregnancy.

During the live session, the first time mother-to-be turned to her side to give her fans a sneak peek of her belly and shared that she had not been “hiding her belly” as it was suggested by British Vogue earlier this month. The magazine was slammed by Gigi Hadid for creating the notion that she was disguising her belly so as to not look pregnant. 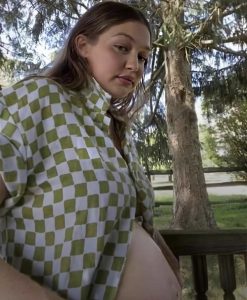 “It’s there, it’s just from the front it’s different,” Gigi said laughingly. Gigi Hadid also went on to share that her pregnancy “is not the most important thing going on in the world,” which is the reason she kept mum about it and also refrains from posting and talking about it.

“Obviously a lot of people have lost lives due to the coronavirus that was in the beginning of quarantine and still happening,” Gigi said. “And then we moved obviously into the reemergence of the BLM (Black Lives Matter) movement, and I thought that our presence on social media should be used for that,” she added.

While fans may have been feeling left out that Gigi Hadid has not been sharing her pregnancy journey, she assured her fans that she has been documenting everything and would be open to sharing it all in the near future. “I’m trying to document it well because I’ve heard a lot of people say obviously make sure you don’t miss it and I will be sharing stuff like that in the future. I’m not in a rush to do it and I feel right now I just want to experience it and I don’t want to wake up every day during my pregnancy and worry about having to look cute or post something,” she said.