Elon Musk Approves Ali Zafar’s Idea Of Better Incentive For The Content Creators
The new CEO of Twitter Elon Musk wants everyone’s suggestions to make Twitter better than TikTok and Ali Zafar has got exactly the right one.
The Owner and CEO of Tesla have just gotten ownership of Twitter. Since several changes are expected by the Tesla owner, he has been tweeting about opinions and ideas. In a poll, he asked Twitterverse if he should bring back Vine. On which Twitterati talked about how Tiktok has gone way better than Vine. Which is when a crossover happened that we never expected. Singer Ali Zafar with a following of 3.2 million followers had some words of wisdom and opinions on how to do so. 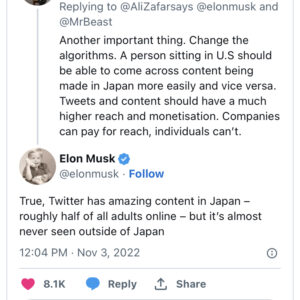 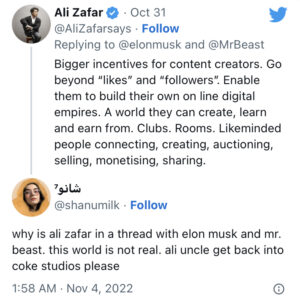 The Teefa In trouble actor went on to say that Twitter should alter the algorithms so that “a person sitting in the US should be able to come across content being made in Japan more easily and vice versa”. “Tweets and content should have a much higher reach and monetisation. Companies can pay for reach, individuals can’t,” Zafar tweeted. He suggested that Twitter should be only about followers and likes but should go way beyond it and make it a complete virtual world. 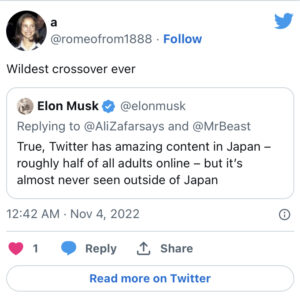 “Bigger incentives for content creators. Go beyond ‘likes’ and ‘followers. Enable them to build their own online digital empires. A world they can create, learn and earn from. Clubs. Rooms. Like minded people connecting, creating, auctioning, selling, monetising, sharing,” he wrote.
The Twitterati thought it was a multitude of madness as Elon musk was actually replying and having a conversation with the Channu singer and appreciating his ideas as well. Some weren’t impressed as they thought Ali was talking more about metaverse which wasn’t exactly a nice idea as it wasn’t doing well.