Magic potion? The secret to the fountain of youth? The Pakistani version of Age Of Adaline? Or simply Neanimorphic? Singer Shahzad Roy makes his fans go into hysteria every time he posts a picture on social media apps. On Tuesday, the Saali To Maani Nahi singer posted a profile picture on the social media app Twitter which caused an immediate frenzy among his fans. At age 45, Shahzad Roy doesn’t look his age and his fans have unanimously agreed that the singer is a vampire as he is aging backward. With poker face pictures, Fans had some hilarious reactions, comments, and tweets.
We have hand-picked some of the hilarious and rib-tickling tweets.
Twitter Calling Shahzad Roy Time Traveller: 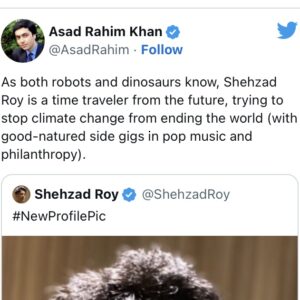 “As both robots and dinosaurs know, Shehzad Roy is a time traveler from the future, trying to stop climate change from ending the world (with good-natured side gigs in pop music and philanthropy).”
A Petition To Make Curious Case Of Benjamin Button With Shahzad Roy In It: 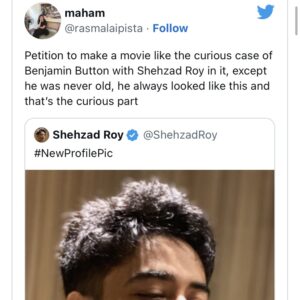 “Petition to make a movie like the curious case of Benjamin Button with Shehzad Roy in it, except he was never old, he always looked like this and that’s the curious part”
Begging To Know The Skincare Routine: 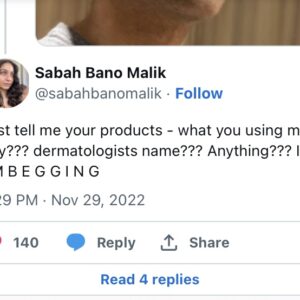 “Good morning. Shehzad Roy is 45 and looks like THAT. Someone sedate me. Please share your skincare routine, sir.”
Suggestion To Leave A Better World For Shahzad by Simply Recycling: 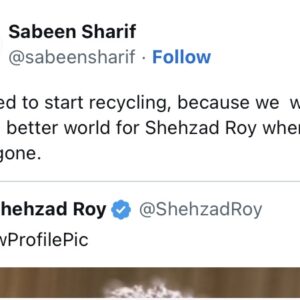 “We need to start recycling because we want to leave a better world for Shehzad Roy when we’re gone.”
Proposal To Donate Serum For Scientific Research that Could stop Ageing: 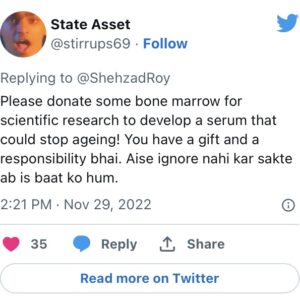 Please donate some bone marrow for scientific research to develop a serum that could stop aging! You have a gift and a responsibility Bhai. Aise ignore nahi kar sakte ab is baat ko hum
Last Shahzad Roy was seen with Kanayari singer Abdul Wahab Bugti at the Lux Style Awards. He did a rendition of the National Anthem which garnered quite mixed reactions whereby some actors like Adnan Siddiqui and Ijaz Aslam criticized it.