The Emirates Mars Mission is all set for the launch of Hope Probe spacecraft. This mission will help study the atmosphere on Mars and is expected to play a crucial role in the global space sector’s project to form the first human settlement on the Red Planet by 2117.

After Hope’s historic liftoff, the MBRSC will be guiding the spacecraft towards Mars and making sure it maintains its contact with Earth. The ground control team, based in Al Khawaneej area in Dubai, will control the probe as soon as it separates from the rocket, one hour after its launch, and until it reaches its destination, i.e., the Mars orbit. 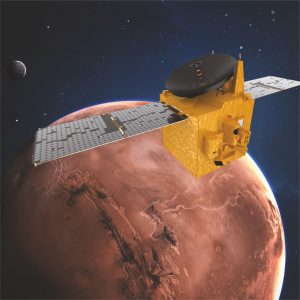 Speaking about the upcoming mission during an online meeting held by the US Embassy in Abu Dhabi, senior NASA scientist Dr Lori Glaze said, “We [NASA] are also taking information on how the atmosphere is lost to space. This is very important information for helping us to understand how the atmosphere of Mars has changed and evolved over time.”

She further said, “I think that combining the information from NASA’s Maven [Mars Atmosphere and Volatile Evolution] mission and the UAE’s Hope Probe will help further our understanding of how that atmosphere is currently being lost to space, but also provide us new insight into how it has changed over time, how it has been lost over time. So it will be a major contributor to that science question as well.”

The Maven spacecraft, which reached the Martian orbit in 2014, is currently studying the planet’s upper atmosphere.